Anti-fracking activists have been shockingly jailed and Cuadrilla is scheduled to begin fracking at Preston New Road next week. At the same time as the latest IPPC report for the World Climate Summit in Poland in December (COP24) underlines the urgency for governments to take much more drastic measures to reduce emissions than were promised in Paris in 2015.

Time and time again, our establishment ends up protecting the interests of the fossil fuel companies over local communities. But we’ve found out that their appeal will be heard in court.

Will you stand with our heroes by wearing our #FreeTheThree shirt?

Half of the profits will go directly to the activists. Buying the shirt will help fund the legal work to get them free, along with their campaign for climate justice, and help support our party in changing the system for good.

It’s never been more important to take a stand against fracking. The courts have  freed up Cuadrilla to start fracking. 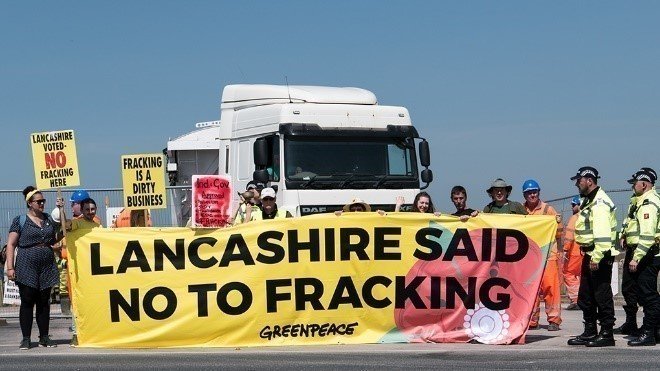 Please show your support for some of the bravest environmental protectors in Britain.

By wearing the shirt, you’ll be directly funding the fight against fracking. And this fight is far from over.

National demo at Preston New Rd fracking site, Saturday 20th October: Free the Three and Protest the Start of Fracking!
A coach leaves 9.15am from Chorlton St.,returning 4pm. Book your free place (donations on the day if you can) on this eventbrite site:  https://www.eventbrite.co.uk/e/stop-the-fracking-free-the-three-tickets-51164846433

Free the 3 Fundraiser gig Saturday 3rd November from 7.00pm
A fundraiser for the four surfers, one who is now out of prison and the three others who are just begining their sentences.
Let's show them and the four surfers that they have 100% support from all of us, we have a night of fantastic live music lined up.  Facebook Event: https://www.facebook.com/events/241592539865578/

Please sign the Change petition now to tell the government to ban fracking!

Ask your Councillor to sign the open letter: https://gofossilfree.org/uk/let-communities-decide-letter/

Contact your MP and ask them to write to James Brokenshire Sec of State for Communities, to oppose the plans - there's an MP briefing here: https://gofossilfree.org/uk/wp-content/uploads/sites/3/2018/07/Briefing_Permitted_Development_Non-fracking_Drilling_July-2018.pdf

And more info on the campaign and the week of action here: https://gofossilfree.org/uk/let-communities-decide/#join